We wanted to spend a couple of days at Simpson’s Beach, having read about Margaret Simpson’s CAP (Charges Apply Property #2024 NZMCA) from many people and sources over the last few years. Peter and Margaret Simpson have been sharing this piece of paradise with campers for a long time, and since Peter’s death, Margaret has continued to do so. 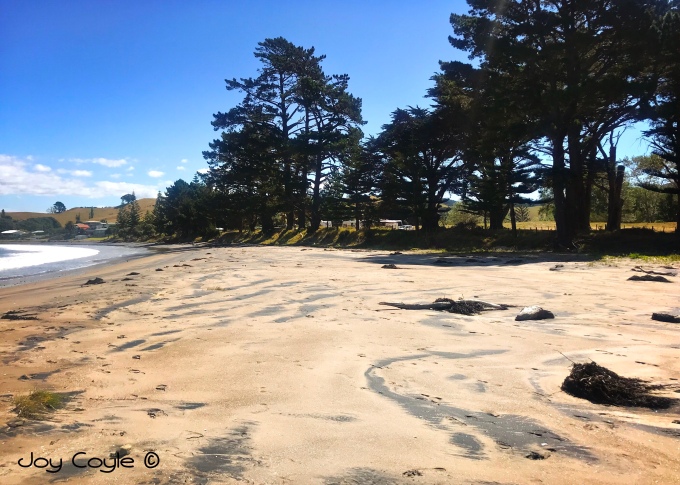 Campers must be fully self contained, and the charge is $10 per van/motorhome per night.

Wharekaho is the home of Ngati Hei iwi who descend from Hei and the Arawa waka which arrived in the area in 1350 AD.

It is also the place where Captain James Cook and his crew experienced their first official Powhiri and welcome onto New Zealand soil in 1769, at Wharetaewa Pa.

There are some ancient pohutukawa trees along the shore which would have been here when Cook and his men came ashore. 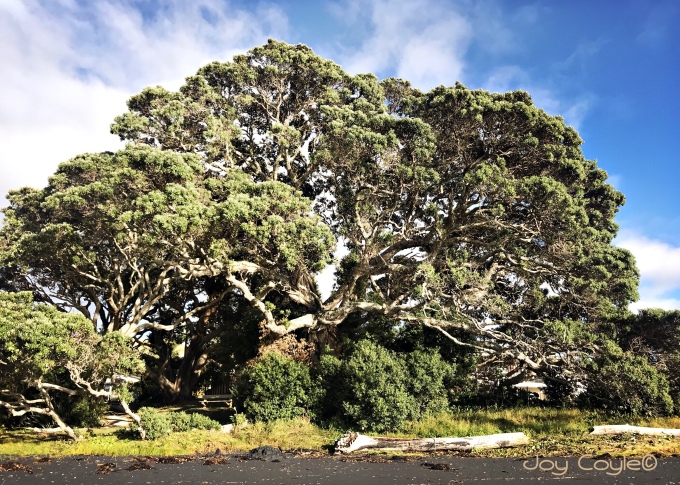 It’s interesting to picture the scene as it would have been then. Perhaps he had tea under this very tree as the exchanges that undoubtedly took place occurred.

During this year’s 250th anniversary of this historic event in October, I believe the Powhiri will again take place on this beach.

During our stay, the beach is strewn with seaweed and the seas quite rough, where usually it is calm. 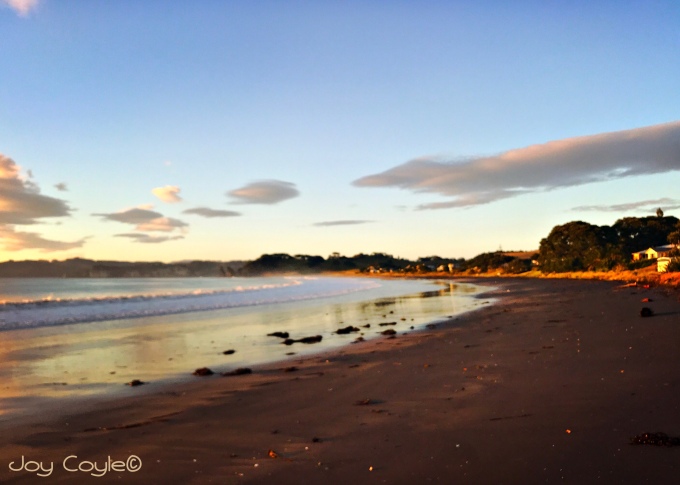 A tropical storm in Fiji is said to be responsible, and just prior to our stay, some of the highest tides in a long time had been experienced, washing right up to beachside properties.

Late sun on the hills surrounding the bay… 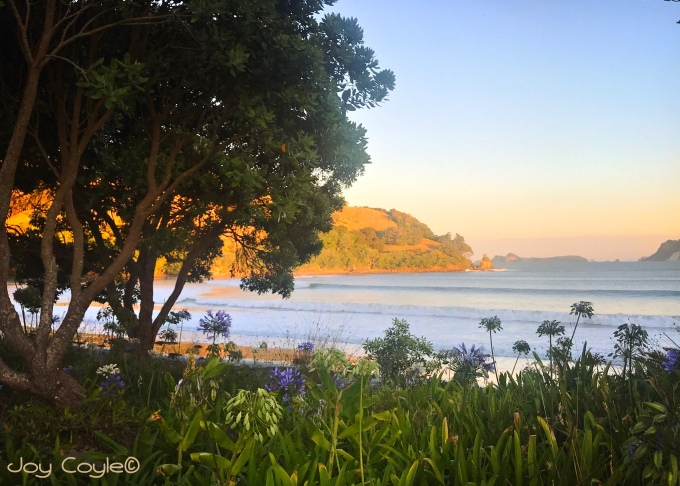 The weather is beautiful while we are here. The daytime temperatures 27-31 degrees C. It’s hot!

Sun’s up. Time for a walk along the beach… 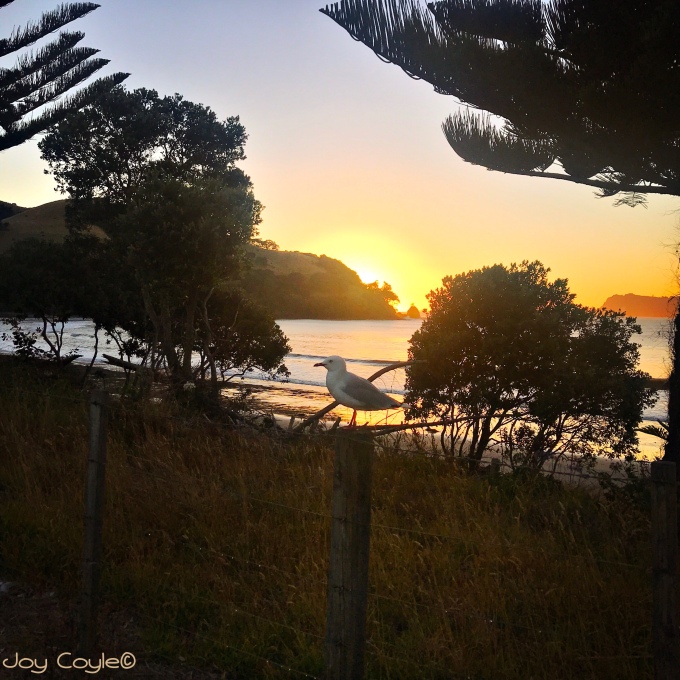 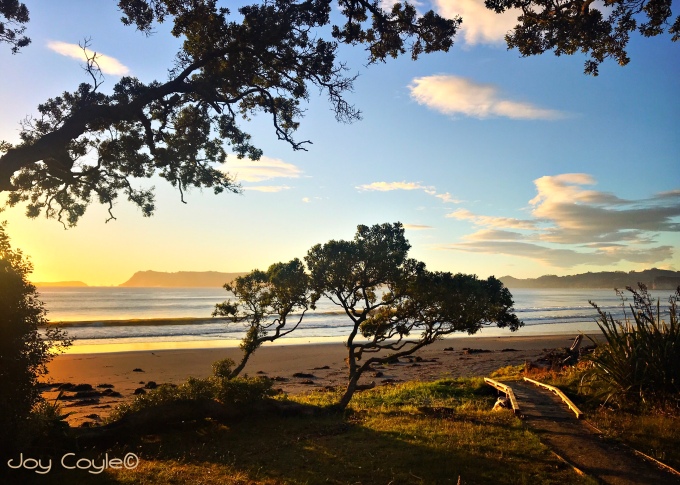 We walk all the way to the rocks at the southern end. The headland here is tapu (sacred, forbidden, protected) and adjacent to a historical Māori Pā site. 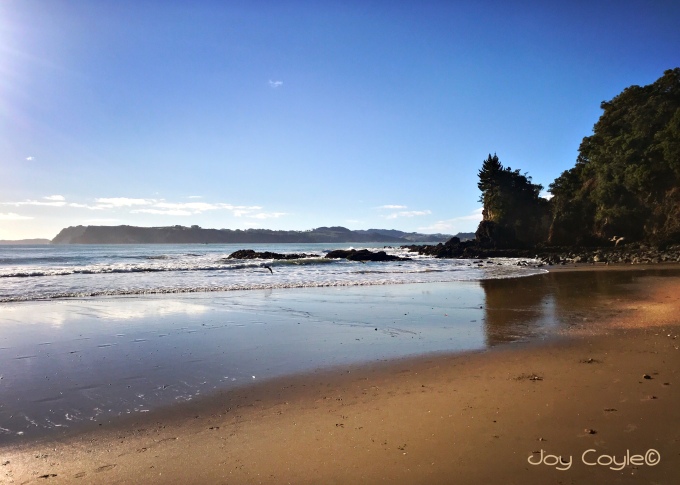 This end of the beach is a Reserve, and a refuge and resting place for shore birds and waders. Dogs are not allowed here, even on leads.

An oyster catcher rests on one leg… 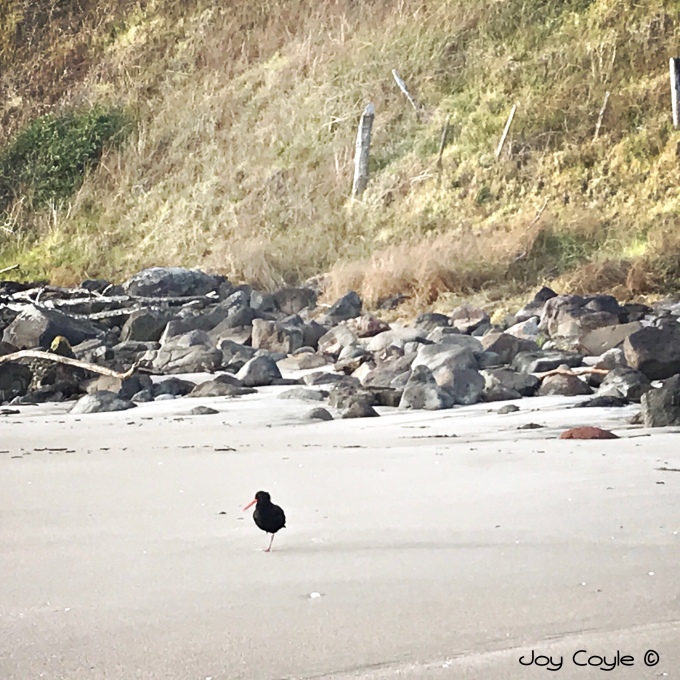 While walking, we meet the Pink Hat Lady.

I’ll call her that because she tells us the reason she wears her pink hat is because the birds recognise it as friendly and familiar. Without it they behave differently around her.

She lives here four or five months a year. The rest of the year her home is in England, but she is a New Zealander from Hamilton. She has a real love for the place, it’s ecology, the birds and environment, and has been coming here since childhood.

The bag she carries is for pieces of plastic she finds washed up on the beach, some so small most of us wouldn’t even notice them. She has eagle eyes, and each bit of plastic goes into her bag.

Before we finish talking to her, she has our eyes trained and doing the same.

She tells us that the effects of the Rena disaster in the Bay of Plenty in 2011 are still evident around Coromandel beaches. Tiny plastic particles in the sand will probably be there forever.

We were living in Papamoa when that event occurred, and well remember seeing people crying on the beach as the environmental disaster unfolded.

Read about it here if you need a reminder.

The Pink Hat Lady points out the New Zealand dotterels, which we had previously not even noticed, so well do they blend into the beach environs, and they’re quite small. Their little legs work overtime as they scurry across the sand.

These little birds are endangered, (though their population is stable,) and easily missed unless you are aware. 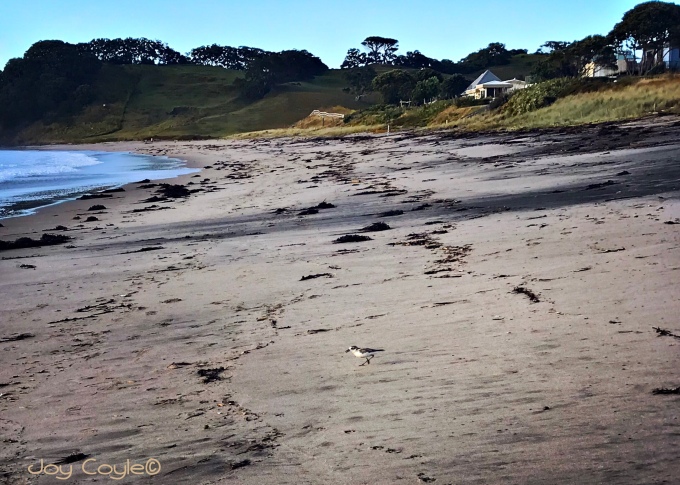 I’ve not really been a bird watcher but my interest is growing, I have to say. 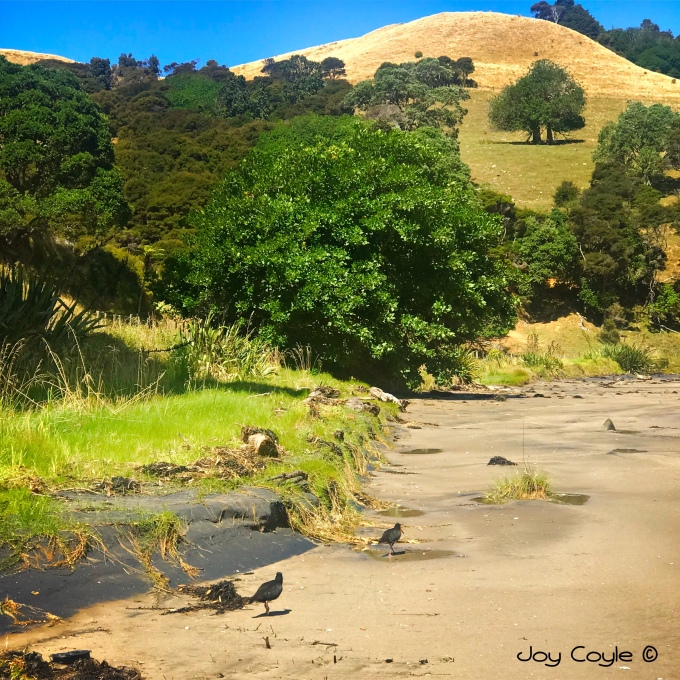 It’s been lovely spending time with cousins Larry and Leith while we’ve been in the Whitianga area. We enjoy each other’s company relaxing over coffees, happy hours, meals and walks. 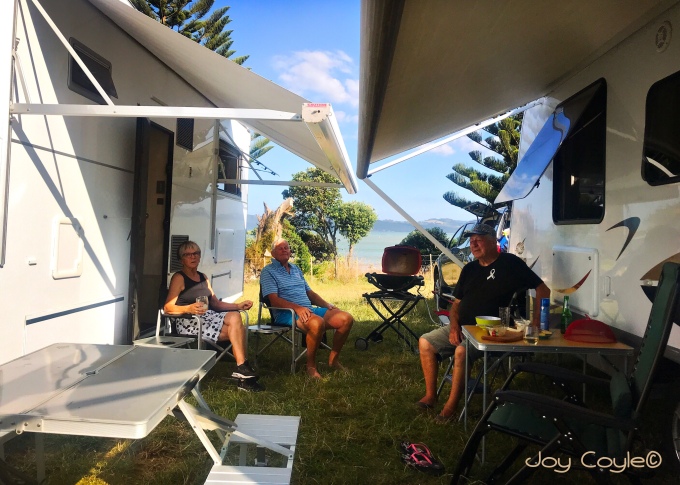 One morning we get coffee from The Office on Buffalo Beach, Whitianga… 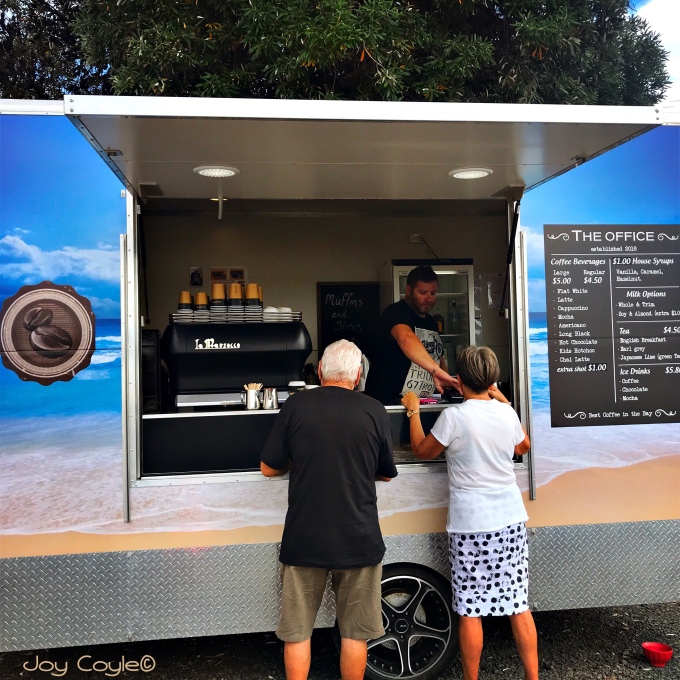 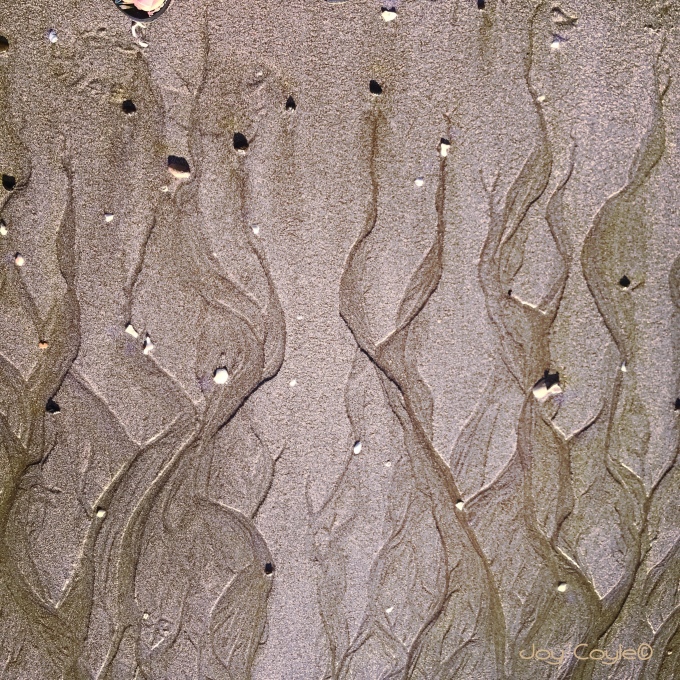 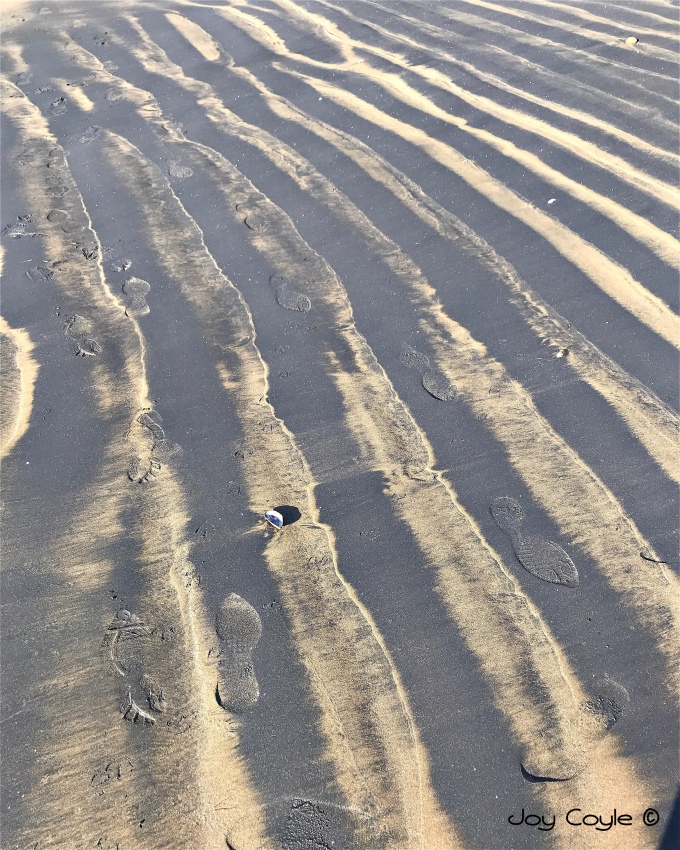 And reflections, cloud patterns, shadows, the roar of the ocean – nature’s memories to savour… 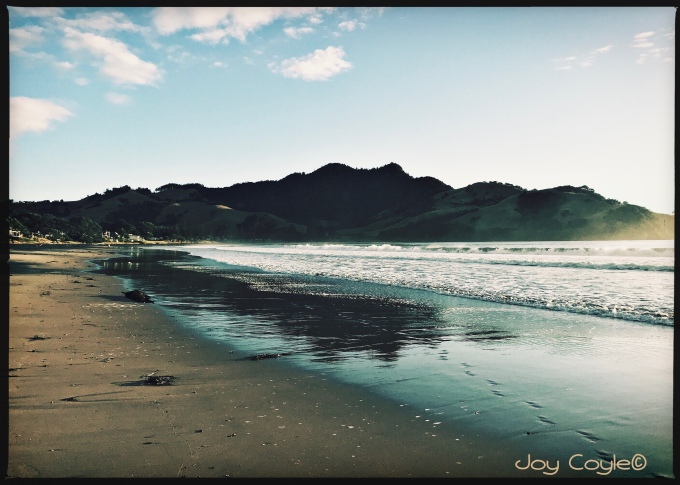 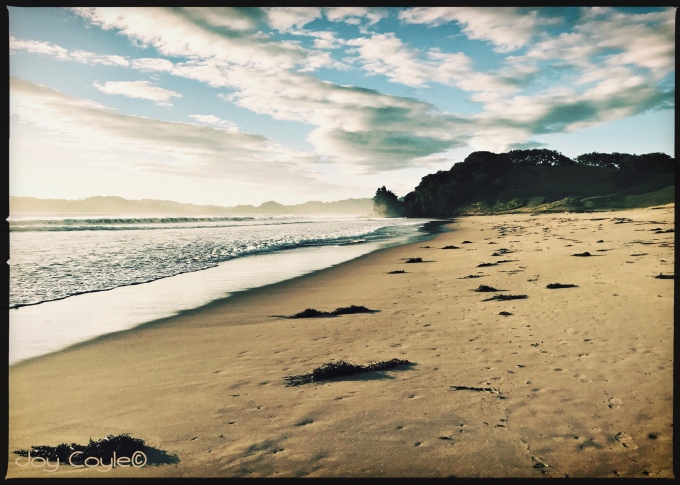 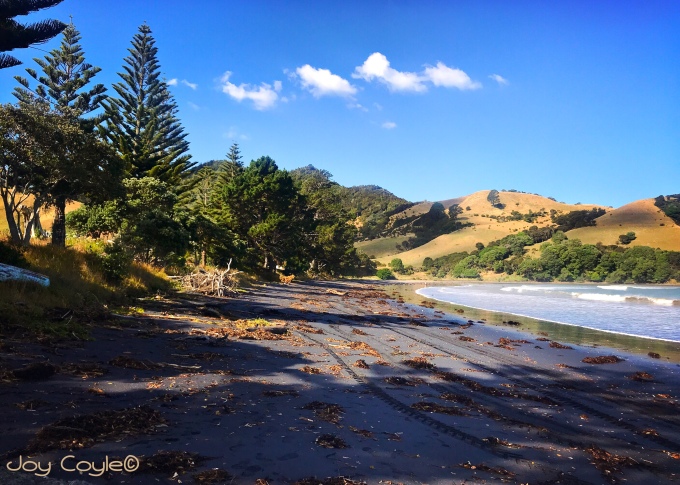 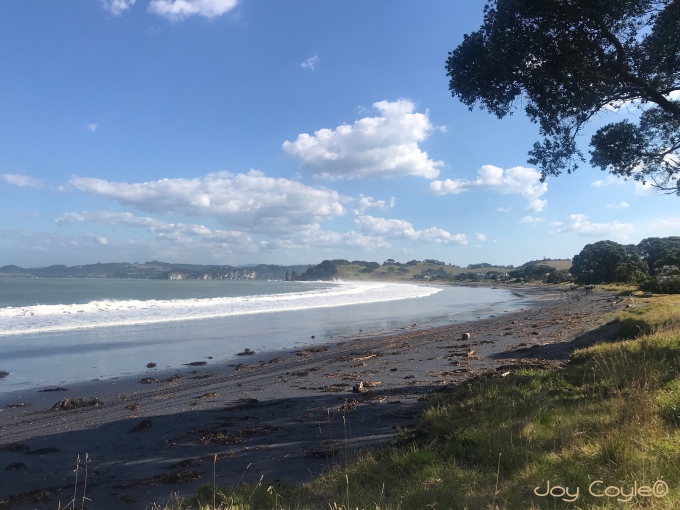 Wharekaho is a truly idyllic spot.

I know we’ll be back.